All About Cannabis: The Truth Behind Big Pharma’s Push to Suppress this Amazing Plant

Cannabis, also known as marijuana among other names, is a psychoactive drug from the Cannabis plant intended for medical or recreational use.  That is the information provided by  Wikipedia, however, there’s so much more to this plant and the benefits of it.  Cannabis has a profound effect on our physical, mental, and spiritual health.  It can also save the planet in terms of environmental impact in many industries.

Sadly, there are still people out there today who view anything marijuana-related as a “gateway drug.” I still remember being taught that in elementary school by the D.A.R.E. program.  Which as an adult I now realize that D.A.R.E. was nothing more than a tool of the elites to further their horrendous war on drugs to fill prisons for profit and suppress anything that could take profits away from the pharmaceutical giants.  All under the guise of “saving kids from drugs.”

I can’t even say that without laughing now.  Look at the health of our nation’s youth.  We have the SICKEST generation of children in American history, yet we spend the most out of any nation on this planet on health care.  While they pretend to care about our kids and keeping them off of “illegal drugs” they are pushing pharmaceutical drugs down their throats at record levels. The LEGAL prescription drug Adderall is almost chemically IDENTICAL to crystal meth.

Americans consume 65%+ of the world’s anti-psychotic drugs while only being 5% of the world’s population.  Houston, we clearly have a problem.  These dangerous anti-psychotic drugs are being prescribed to children younger and younger.  When I was a kid it was unheard of for a five-year-old to be on psych drugs.  Nowadays it’s the first thing doctors suggest when little Timmy can’t sit still long enough for his teacher’s patience to tolerate.  Nevermind the fact we’re injecting them with toxic vaccinations, filling their little bodies with metals then subjecting them to constant EMF that is harmful to the human body and has a profound effect on one’s behavior/psyche.    Let’s drug Timmy instead because that’s what the doctor recommended.

Our society is in a fragile state at the moment.  Being pushed over the edge by corporate imperialism dominating the choices our so-called leaders make.  Crony capitalism disguised as a free market enterprise. I think more and more people are realizing every day that our government is beyond corrupt.  The FDA and the CDC cannot be trusted and we are sick and tired of the “sick care system” bankrupting us and leaving us in poor health in the process while taking extreme measures to suppress anything beneficial to the human body.  Including mother nature. 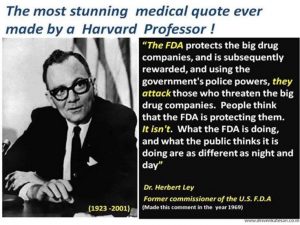 People are rising up and educating themselves on holistic health, nutrition, how energy affects our physical health.  The awakening has begun.  Nurses and doctors (who have a conscience) who are seeing the outcome of our failed system are leaving their jobs to promote a new way of thinking.  Learning new ways of healthy living, prevention, treatment.  Knowledge is power and although the powers that be have tried very hard, they just couldn’t suppress this knowledge forever.

Gone are the days of blindly accepting the recommendation of those in white lab coats with a couple letters behind their name and fancy framed degrees on their office walls.  The Pharma God’s reign is over.  Mother Nature is going to reign supreme in the end, no doubt about it. 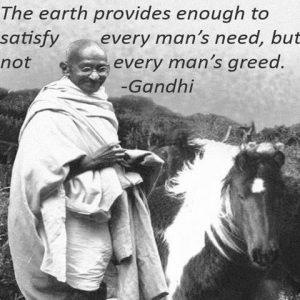 I know some people are concerned about taking cannabis oil because they think it will make them “high.” CBD oil does not get you “high” in the traditional sense of smoking, vaping, or ingesting marijuana that contains high levels of THC (tetrahydrocannabinol). THC is what causes the “hazy”, “stoned,” euphoric, sometimes mind-altering thoughts and feelings that are typically associated with marijuana use. These do not apply to CBD oil usage.

I also want to point out while researching cannabis you are going to find a lot of pharma propaganda claiming science does not support the claims others are making about cannabis.  I am not going to tell you what to believe, nor am I going to advise you to steer clear of certain outlets.  That’s what the pharma trolls do.  I think you’re intelligent enough to think for yourself after reviewing material from all sides of this issue.  Pharma doesn’t think you should think for yourself and wants you to blindly accept the recommendations by their so-called experts they have on the payroll.

If you go talk to your primary care physician about cannabis oil they either do not have the knowledge to help you or simply refuse to as it may make their profession obsolete.  Ever since I got a behind the scenes look in the healthcare industry I have always advised people to seek out a doctor of osteopathy (D.O.) rather than a medical doctor (M.D.) for this reason.

They are similarly educated and certified, but there are differences in their training and philosophy of patient care. Your health insurance provider more than likely does not restrict you to an M.D.  I personally believe a naturopathic doctor or chiropractor is the most beneficial but most health insurance plans do not cover these providers as primary health physicians.  A D.O. is the next best thing in my opinion.  Get to the root of the cause instead of just putting band-aids on the symptoms throwing toxic pharmaceuticals and treatments at it and hoping for the best.  (The third leading cause of death in America is medical mistakes).

Look at it this way.  If you hired a professional to put a new roof on your house and paid top dollar to get it done, only to discover the quality was not up to par and would need to be replaced again sooner than later, would you hire that same professional?  NO.  So why are we going back to these providers who are nothing more than legal drug pushers and representatives of the pharmaceutical companies?  Isn’t the level of expertise dependent upon the results of the expert?  So if chemotherapy is 97% ineffective  wouldn’t that mean oncologists are terrible at their jobs?  Would you still have a job if you failed at 97% of your duties?  I’m guessing not.

One huge reason I am covering this topic in a blog post is that if I knew then what I know now, I could have saved 4-5 loved ones from early graves.  I cannot do anything about that now.  So I decided the next best thing would be to save others from unnecessary suffering and having their lives cut short for no other reason than the insatiable lust for greed and power by a group of old oligarchs. Simply sharing this article could save a life.

I had been reading all these testimonies of people who had incurable or debilitating diseases getting great results using CBD oil.  Everything from cancer to Parkinson’s to ADHD to PTSD and much more! I wanted to try it for myself before I ever wrote an article about it.  I only had to take it twice to notice how much better I felt (and I’m not even sick) and the wonderful effects it has on battling depression.  You can also give it to your pets!

Meditation can be powerful on its own, but if even a microdose of cannabis is introduced, it’s taken to a whole new level. This can be said about anything when paired with cannabis. It makes art, music, and creativity better; it makes a sunny day better; it makes exercise better; it basically improves whatever one’s doing when they use it. This includes meditation.

You’d have to experience it yourself to know what it’s like, and the simplest explanation I can give is that it provides a higher state of consciousness, known by some as the essence of God, in plant form. It’s a gift from our creator meant to be used spiritually, ceremonially, medicinally, recreationally or however it best serves us, and the fact that it enhances everything means that it enhances who we are on a soul level.

In fact, here’s an excerpt from a book written by a descendant of Mary Magdalene with some of her hidden teachings revealed that include cannabis. 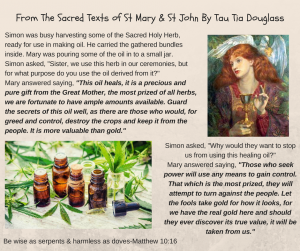 If after reading the stories/watching the videos below of how CBD oil changed peoples’ lives,  to try some for yourself click HERE.  (I am in no way affiliated with this company nor do I earn any affiliate commissions by posting it). I am simply sharing something I tried and loved.  Which you will see much more of conscious brand recommendations in my upcoming blogs.  Like I always say, “Be the change you wish to see in the world.”