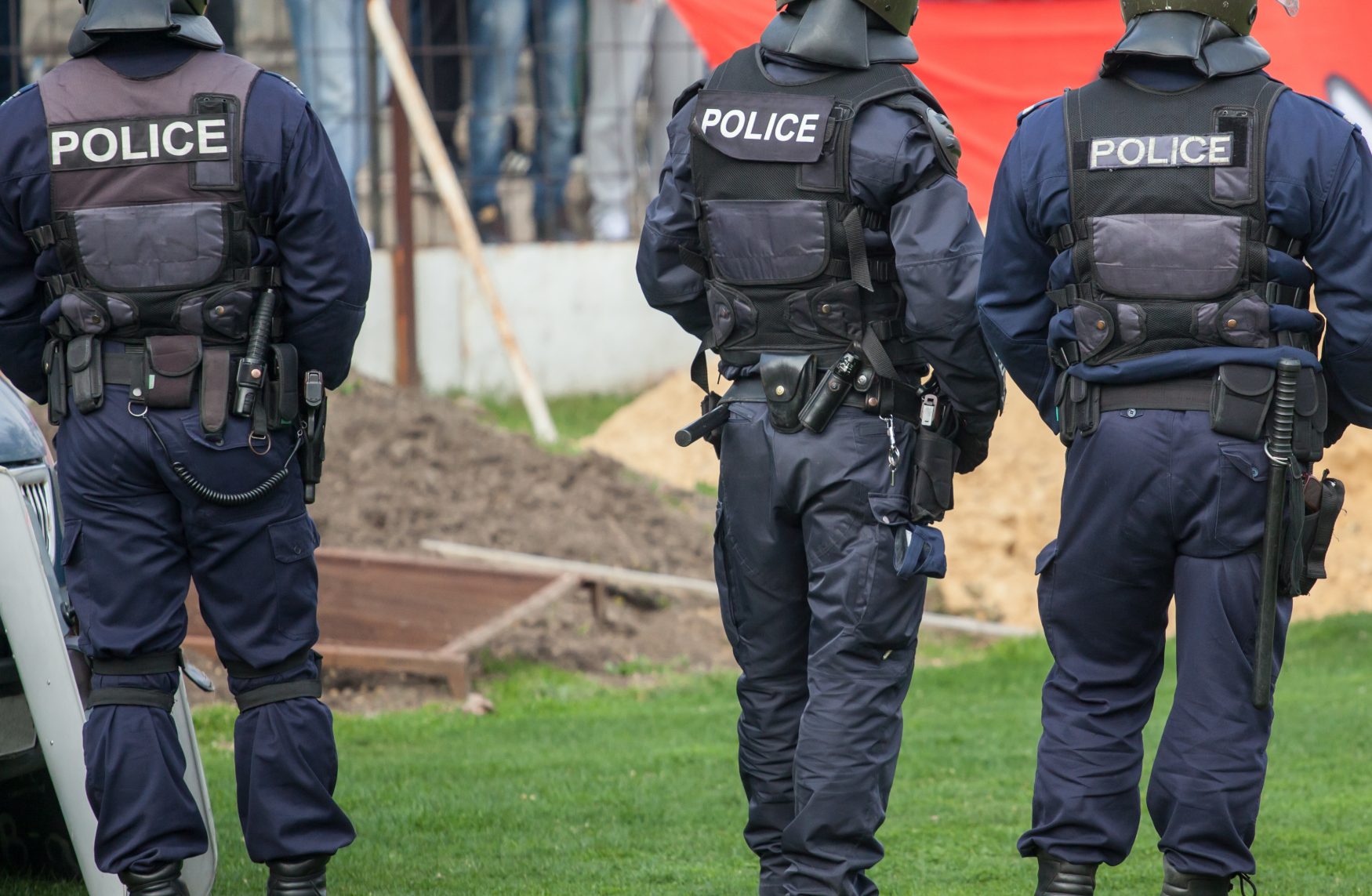 Civil assets Forfeiture is growing out of control across the nation. Thousands of private citizens are stopped for routine traffic violations (broken tail lights, obscured plates, speeding, etc) and are questioned: “Do you have anything in the vehicle I should know about?”

It seems like a fairly reasonable question to most innocent citizens. The vast majority of us aren’t criminals and therefore we have “nothing to hide.” So naturally, most people openly shared that they were traveling with cash, assets, or guns to the officer.

Unfortunately, this opens a huge can of worms because now that officer, according to the charge of his office, must exercise his/her judgement about what they think the assets are being used for.

In a country obsessed with the “War on Drugs” and the “War on Terror” you can easily predict the end result. Right here at home in the Land of the Free and the Brave™.

There were 61,998 cash seizures totaling $2.5 billion since 9/11/2001 without warrant or indictment through the ”Equitable Sharing Program”.

State and local authorities were given $1.7 billion of that total, while Justice, Homeland Security and other federal agencies received $800 million according to The Washington Post.

It’s important to note that half of the seizures were below $8,800, so these were not drug dealers carting around large cash purses in most cases, but just normal people traveling with cash and assets to make purchases.

Other sources report a total value of $4.5 billion was stolen from U.S. citizens (including cash, cars, guns, homes, boats, etc) without trial, without hearing, and without even a criminal charge.

This is legal? What is Civil Forfeiture?

Yes. Unbelievably, this is all legal (whether it was lawful is another story). Civil forfeiture legally allows government agents (police) to seize (steal) cash, cars, boats, and even homes (any property suspected of being involved in criminal activity).

But, unlike criminal forfeiture, civil forfeiture does not require a criminal charge: suspicion alone is sufficient. In fact, 87% of all assets stolen were taken in civil and not criminal seizures.

In other words: property owners could permanently lose their property without ever being charged with a crime. No trial, no lawyer, no judge – just a cop’s opinion.

And that is exactly what happened to 1000s of U.S. Citizens. To learn more about how egregious it really is, this short video exposes how $29 billion was stolen in just 14 years: ”Policing for profit Visualized: How Big Is Civil Forfeiture?” 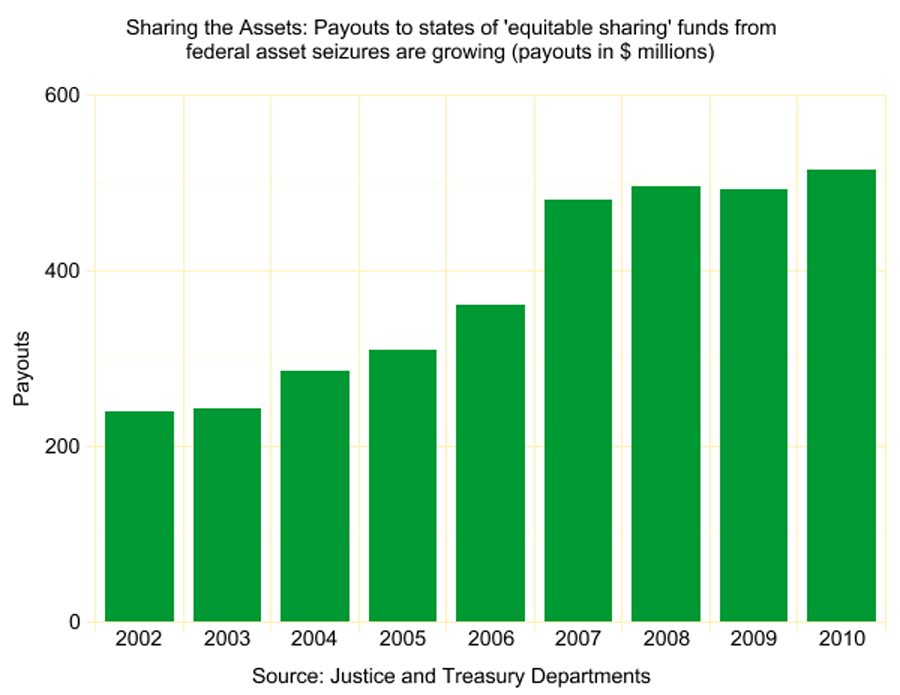 Payouts to States from Equitable Sharing funds have only increased.

All of this is sounding pretty crazy, but it’s even more insane than that…

In civil forfeiture, it is the asset itself that must defend itself from government encroachment. Take for example the case of the United States of America v. $124,700 in U.S. Currency.

Clearly, the currency was in the possession of a man or woman, but that does not matter.

Once an officer determines via their opinion that an asset is involved in criminal activity, the government simply exercises its jurisdiction in rem or, in layman’s terms, “power over objects.”

You are reading this correctly – right here in the United States of America our government is legally allowed to steal directly from its people in the most blatant way.

This “jurisdiction in rem” exposes an entire role of governance that most people are not aware of at all.

Whenever you register any asset with another entity, like the UNITED STATES Federal corporation, what you are technically doing is surrendering control of that asset to that registrar.

This opens an entirely new discussion which will be saved for another article, because it needs to be explored in depth especially since the entire concept is so utterly foreign to most normal good human beings.

Just let it be known that the registrar controls the asset and the registrar is simply seizing whatever it claims it controls, regardless of what the owner feels justified to. This includes cash, houses, cars, boats, guns, etc.

“The secret to success is to own nothing, but control everything.”

– Nelson Rockefeller (It would seem the United States does a good job adhering this maxim.)

So, when Attorney General Jeff Sessions further validated the practice of civil forfeiture in 2017 it raised alarms. (Which part of #MAGA was this again?).

First, his focus was on the “Equity Sharing Program” which is a only small portion of forfeiture revenues. This program specifically enables police to bypass their own state’s forfeiture rules by relinquishing the assets to the Feds.

Later, the Feds route a large percentage of that value back to the local police. Sounds an awful lot like… money laundering, doesn’t it?

A key change he made to the program was to authorize federal “adoption” of assets seized by state and local police when the conduct that led to the seizures violated federal law. But, to be sure – the property is not immediately returned to the property owner.

Instead it’s handed over to Federal authorities who then have 45 days to notify the property owner of their rights (that’s if it can even be tracked).

To recap, if the property is yours, you would need to first suffer police stealing it from you, then wait for procedures to be validated, and if it wasn’t up to federal guidelines, you must then wait for the feds to get in touch with you.

And that’s just fine because if you have $22,000 stolen from you while you are traveling, you probably never needed it anyway, right? ”Man Loses $22,000 In New ‘Policing For Profit’ Case”.

In short, Civil Forfeiture is now totally legitimized as a “valuable tool to combat drug abuse.” Which means, quite simply, all U.S. citizens are at risk.

So Now that You Know About the Problem, how can You Protect Yourself?

In legalese a “citizen” is a subject who has privileges and duties: “Citizen, in American Law [is] defined as one who, under the constitution and laws of the United States, has a right to vote for civil officers.

[Otherwise] when [used] to designate an inhabitant of the country, or one amenable to the laws of the nation [green card holders for example], “subject” is the word there employed. -Blacks Law Dictionary, 1891 edition.

One of your duties as a U.S. citizen is to abide the rules that the State authority prescribes, thus – you must abide the obviously unjust terms of civil forfeiture.

And, the supposed benefit you derive from this is that you are protected from “terrorism” and “drugs.”

All that said, if you want to protect yourself and your private property, you need to stop volunteering to be a U.S. citizen.

This is a 100% voluntary admission unless you live in Washington DC, or any of its territories (e.g., U.S. Virgin Islands, Puerto Rico, etc) or are employed by the UNITED STATES Federal corporation or any of its many subsidiaries.

Or even better, a free American National. This is the why we started DTSS. We help people navigate the confusing waters of changing their status from that of “U.S. citizen” to free “American National.”

American Nationals rescind their oath to uphold the codes of the UNITED STATES Federal corporation, and instead must abide the Common Law which governs the Republic.

We believe all men and women should be free. It is our birthright, and it is what our forebears died to preserve. Learn more here and join our growing ranks when you are ready!

2 Comments on - Cover Your Assets! Government’s Favorite Cash Cow is Back: Civil Forfeiture