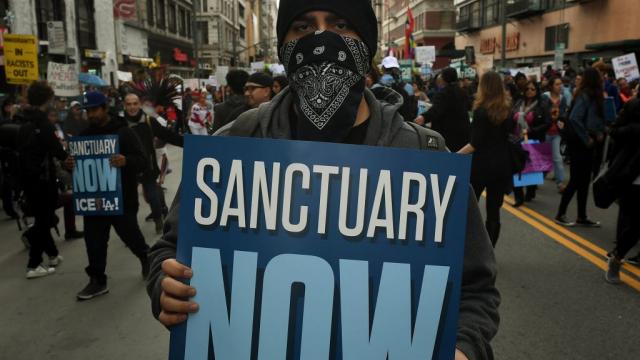 The blatant disregard for the safety of the American people by our own officials is not even being hidden anymore.  It’s right out in the open. That’s how bold these criminal have gotten.  Trying to use a far leftist Marxist doctrine to shame any American into supporting a forced immigration agenda, which might as well be called an invasion.  Let’s be real here.

The shaming tactics used to shut down dissent relating to this topic get more ridiculous by the day.  Shouting down people and referring to them as racists and xenophobes.  Reminding every person with a lighter shade of skin that they are immigrants too.   Any talk of illegal immigration v legal immigration is quickly shut down with claims of racism, ignoring the obvious difference.

It’s not Commie California this time though. New York City and the State of New York have become known strongholds for the Democratic Party – and as per that label comes with it endless allegations of corruption – with the Immigration and Customs Enforcement (ICE) agency now saying that NYC released 440 “dangerous” illegal alien criminals into society.

New York City is one of the multiple cities within the United States of America which acts as a “Sanctuary City” in violation of federal immigration laws, protecting criminal illegal aliens from their potential deportation and refusing to cooperate with federal law enforcement in the apprehension of these criminals.

Out of the 440 released in New York City, at least 40 of those criminal illegal aliens proceeded to re-offend and were again arrested for crimes by local law enforcement officers, according to ICE.

That’s quite a disturbing statistic, considering these were already criminal the moment they entered the United States of America illegally, committed additional crimes, only to be released, and then commit more crimes against society.

”ICE has not been notified about the release of aliens in custody at New York City facilities since 2014, except for those that fall within the 170 crimes considered egregious by the Mayor’s Office.”

”Sanctuary policies, which have pushed ICE out of jails, force our officers to conduct more enforcement in the community – which poses increased risks for law enforcement and the public. It also increases the likelihood that ICE will encounter other illegal aliens who previously were not on our radar. For ICE, it makes more sense to devote resources to jails to solely focus on criminals, reducing the broader enforcement efforts and allowing the apprehension of individuals with the secure confines of local jails.”

Obviously, many Americans disagree passionately over the issue of immigration. But not in question is the fact that immigration law is made by Congress and enforced by the president. 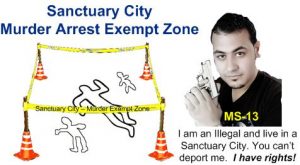 Why does the left ignore the cries for help from African Americans, Hispanic Americans and others who have immigrated here legally?  Their cities are being destroyed and riddled with crime because America has gone so far off the rails of sanity it’s now racist to now allow yourself to be a victim.

Check out this video from a brave woman in California standing up to her representatives to abolish the protection of illegal immigrants.

Northern Star reports: A 14-year-old girl who was allegedly held hostage in a Houston apartment by purported MS-13 leader Alvarez-Flores, his co-accused Hernandez-Rivera and four other gang members in January, is at the centre of the prosecution.

The girl told police she was plied with alcohol and drugs, sexually assaulted by a gang member called “Flaco” and held down while Alvarez-Flores tattooed an image of the Grim Reaper stretching from her knee to her foot. More than a dozen members of the LA-based, Salvadoran gang Mara Salvatrucha, commonly known as MS-13, have been charged in connection with at least eight murders, many involving high school students, across the US since last month. All illegal immigrants of course.

It is no surprise that New York is just as bad as California pretending to care and cater to illegal immigrants while they let veterans sleep on the street.  Good ol “Dreamer” Supporter Chuck Schumer is the champion of illegal immigration.  He hates America so much and is foaming at the mouth to destroy her. It is disgusting.  Appalling.  Why are so many Americans putting up with this?  To allow our daughters to be targeted by these gangs that sneak into the US and then get safe haven from deportation after they commit crimes?  This is so far off the rails of sanity I don’t even have words for it.  I’m just glad people in those cities are starting to fight back and get their voices heard.  It’s about damn time.