It is with a heavy heart that I bring you the sad news of the death of a self-described holistic doctor, author, speaker, radio show host, James Winer, of Pittsburgh Pennsylvania (just minutes from where I used to live).

He was not just a legend in Pennsylvania, but far beyond, and known throughout the world as his friend says below in the video.

Initially, Dr. James Winer’s office staff would not say publicly how or where he died, at least not that we could see. They stated they didn’t want people calling the office asking questions, and, understandably, they’d update folks later.

Then our story came out 11 hours after their announcement (I wanted to give some time) and other sites followed suit.

Within hours of our story, I’m told the staff was inundated with so many more inquiries that they had to respond: Dr. Winer had died of cardiac arrest, in Florida.

He was visiting our state, a place where we’ve already lost so many holistic doctors.

Relatives of Dr. Winer have since shared on our pages and Dr. Winer’s explaining that he was (allegedly) out exercising which is why he didn’t have any ID, and therefore, brought in as a John Doe. They say he left his ID in the car so we assume he wasn’t at a gym exercising as he’d have to have some kind of ID. (This might also explain why so many patients tell me he was missing. It sounds like he was.)

We would like to know in what condition he was found and where. Again, we cannot tell you how many times the cases and causes of death have changed in these 80 cases, Dr. Winer marking number 80.

We are also looking for clarification about the peculiar comment by a female patient who told us she was recently waiting to see him speak in PA. When he didn’t show up they were told he was stuck in traffic, then the event was canceled. However, it seems he may have already been dead. We will update you on that when we have more info.

We never like to speculate, but we imagine whatever shape this great hero of a doctor was found in, with no ID or wallet (or any identification at all it appears) that he was unable to speak or give his name. I am not sure if it was the side of the road, sidewalk, if people were around or not, and will wait until we are given the facts…if indeed we ever are.

We have many cases of our own close friends whose prominent spouses or immediate family died. One example would be the famous best selling Manhattan author and holistic MD, Nick Gonzalez (see recap either #8 or #9 – we had 2 on the same day). They initially stated it was a heart attack with Dr. Nick, but then, since there had been many deaths I’d written about, even his own wife (now our friend), decided to do an autopsy.

Despite initial belief, they said it was not a heart attack after all with Dr. Nick.

I have met celebrity doctor Nick Gonzalez’ wife Mary Beth Gonzalez, on several occasions and in multiple states around the US. I’ve even had dinner with her a few times and just had the pleasure of sitting next to her at an award ceremony last month in Florida where she was accepting an award on her late husband’s behalf for his great work (I was shocked to receive one as well that night).

We like to see autopsies done to rule things out. So many of these cases (80 now) have had such sketchy details, like this doctor coming in as a John Doe and family having to search for him.

We don’t see the harm in an autopsy, and if it were my relative? I would demand it. There are now so many deaths for which there are more questions than answers.

Two of the last posts Dr. Winer ever made were about the doctor deaths I have written about. Sadly, it wasn’t my site where I have spent two and a half years putting the timeline together day by day as more die. It was some site just sharing my story and selling something with an infommercial video which is really awful. It’s in very poor taste and the families of the doctors and I are sad and even angry to see those ads still up by whoever is behind them. We wish he’d seen my stories instead with 78 doctors at the time, then 79 last week, and now, 80.

Dr. Winer also shared a story from my other half (going on nine years) Dr Mercola, ironically about heart heath: 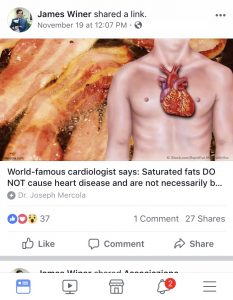 We realize it’s a lot for a staff to handle, but we have droves of patients writing us saying that they just want the story since there are an odd set of circumstances surrounding his death.

We hope to confirm 100% the rest of the details. I reached out to a relative who posted in the comments on my site and asked if she could write me. I only did so since she posted first with a kind message.

Dr. Winer literally had thousands of fans on his Facebook page alone and thousands of daily listeners to his radio show in multiple states.

While Dr. Winer was 70 years old he looked much younger. His patients have told us he was a vegetarian for several decades and yet another just wrote me to say he was super healthy and they’d been a patient of his since they were 8 years old. They said, like many others, they do not think he died of a heart attack. I don’t know whether he did or not, but I’m a believer in science and just am shocked every time I see an autopsy skipped and I’m told he’ll be cremated soon, if not already.

We are sending thoughts and prayers to his loved ones.

Here’s a video I made the evening his death was announced (well it was 3:30 am but I couldn’t sleep so I got up and made one).

His biography reads as follows:

Dr. James Winer is one of the leading pioneers in the natural health field.

For over forty-five years he has been on the cutting edge of the alternative health movement, serving in a wide variety of capacities.

He is also the author of books, audio, and videotapes, and articles on natural health, instructor of nutrition at a university, fitness instructor at an undergraduate college, and currently the founder and director of the Winer Wellness Center in Pittsburgh, PA.

Dr. Winer has traveled throughout the world studying and teaching natural health principles. While living in France, he attended the University of Paris.

In addition to teaching and lecturing across the United States, Dr. Winer has appeared on thousands of radio and television programs in Pittsburgh, PA and across the country.

He is dedicated to sharing his wealth of knowledge, understanding, insight, diagnostic methods and abilities with his patients and all who are open to helping themselves with the latest advances in natural healing.

There are few, if any, in the field of Alternative Medicine in this country with his vast knowledge, experience, aptitude or with his sincere and ethical commitment to helping others.