The REAL Controllers of Humanity: The Papal Bloodlines 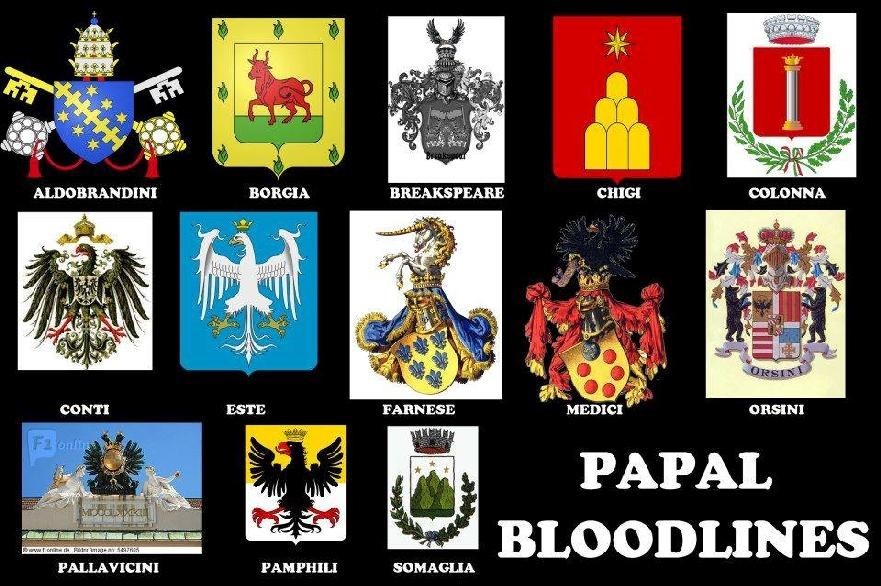 The Real Families, who from behind the scenes, control the World through Religion, Finance, Property, Land, and through control and manipulation of the Markets of the World are the Papal Bloodlines.  Not the Rockefellers or the Rothschilds or the Bush/Clinton Regime, those are all lower on the totem pole subservient to the papal bloodlines of the jesuits/black nobility.

This collated information from what is readily available on the Internet and other ‘sources’ should be read in conjunction with additional information written about this subject which helps to clarify a few of the points covered that may otherwise be misinterpreted and misconstrued:

The personages often imagined to be at the top are actually the second level of the human power hierarchy. Yes, the Rothschilds control massive amounts of wealth, but whose wealth is far greater than their own?

It would make sense that some of these power structures date back to the height of the Roman
Empire, the founding of The Catholic Church and perhaps back into antiquity, and have moved pawns, Kings and Queens behind the scenes for at least a few millennia.

The main family names are:

All controlled through the Jesuit Order and their Knights of Malta & Teutonic Knights all based in missile protected Borgo Santo Spirito in Rome Papal Bloodlines.

This is the true power finally. This is the Guelph and the Ghibelline power over mankind. The Cecil family were controlled by the powerful Jesuit family known as the Pallavicini.  Maria Camilla Pallavicini is far more powerful than Queen Elizabeth II. The Queen and Prince Philip are totally subordinate to the Papal Bloodline the Breakspear Family and their Jesuit UK HQ at 114 Mount Street.

A study of who funded Elizabeth I with an astronomical amount of money to fight the Spanish shows that the funding entity was indeed the Pallavicini family bloodline. The most powerful man right now in the conspiracy over this World is a Roman by the name of PEPE ORSINI of the powerful Roman Papal Bloodline. The Orsini are also known as Orso and the ancient Maximus family.

There is no one more powerful than this figure who is really the Grey Pope. The Papal Bloodlines are the secret shadow hierarchy of the Jesuit Order even behind the Black Pope touted at the #1. These powerful bloodlines are the Breakspear, Somaglia, Orsini, Farnese & Aldobrandini. 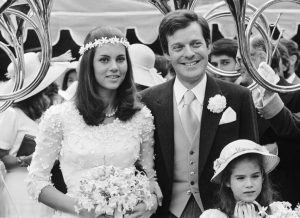 Another real head of this is Henry Breakspear who resides now in Macau in China. Many of the Papal Bloodline heads now live in Asia and India. What does that tell you? The Black Pope, Adolfo Nicholas (who had recently resigned) was brought forward for the position due to the Jesuits bringing about of Asia as the next power player of the agenda.

Both this Black Pope and the white Pope aren’t of Papal Bloodline, they are both commoners.

These bloodlines constitute the most powerful families on the planet. The Grey Pope is the one in between the white and black, but unseen, yet controls the left and right hands of the RCC.

The following image is the Coat of Arms of these leading Papal Families: 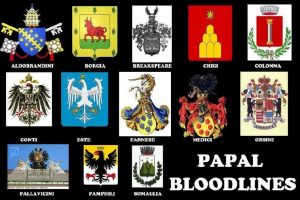 The next in power beneath the Jesuits is the Bourbon, King Juan Carlos of Spain. The Roman Monarch of the World, The King of Jerusalem and SMOM Military Navigator. This is the true World’s power system right now.
Adolfo serves as a military General protecting the Zoroathrianism and Mithraism mystery schools. The Jesuits were created by the Papal Bloodline Farnese during the reign of Farnese Pope Paul III. Loyola was commissioned by Alessandro Cardinal Farnese.

The Jesuit general is referred to as the ‘”Black” Pope at the Vatican because he always dresses in black. The Jesuits were officially founded in 1540 by Farnese Pope Paul III. Ignatius LIEola became their first general.

All the Jesuits answer to their general in Rome, and he in turn is content to run the show from behind the scenes, without any publicity or public acclaim so as not to arouse the age-old Italian hostility to the Spanish.  The Black Pope is allegedly, to some, the ‘President of the World’, but I doubt this. He is a part of the Arcana Arcanorum controlled by the Papal Bloodlines within the I-Mori.

These bloodlines are the omega point of control. These are the Farnese, ORSINI, Aldobrandini, Somaglia & Breakspear. Their war room command centre is within the Borgo Santo Spirito which is missile protected! Henry Breakspear and Pepe Orsini are in high control! Jesuit Assistancy Soldier, James Grummer SJ controls the United States Corporation.

You can find a list of corporations masquerading as countries around the world, by following THIS LINK.
Adolfo, however, is not of the Papal Bloodline; he is a commoner, just like the current Pope!

All of the above mentioned are part of what is referred to as the Black Nobility. The “Black Nobility” are/were the oligarchic families of Venice and Genoa, Italy, who in the 12th century held the privileged trading rights (monopolies).

The “fondo” is the collective financial interest of a “family” of the landed aristocracy, or a “family” of the rentier-financier aristocracy. The fondo functions as a private bank; or a syndicate of several fondi may combine forces to create a jointly controlled private bank or insurance company. The characteristic activities of the fondi involve generating income from speculation on gains from the manipulation of commodity prices – through monopolies – over some portion of trade in a commodity, including raw materials and their means of transportation.

Syndicates of fondi greatly increase their power over society by financing the debt of government. If they are able to establish a relative monopoly of lendable currency, bullion or credit, the syndicate can dictate key policies of governments, including the appointments of government ministries.

Thus they control policies on tariffs, taxation, public works, land concessions, special monopolies, and so on. The “Black Nobility” are/were the oligarchic families of Venice and Genoa, Italy, who in the 12th century held the privileged trading rights (monopolies). The first of three crusades, from 1063 to 1123, established the power of the Venetian Black Nobility and solidified the power of the wealthy ruling class.

The Black Nobility aristocracy achieved complete control over Venice in 1171, when the appointment of the Doge was transferred to what was known as the Great Council, which consisted of members of the commercial aristocracy (among them the infamous de’Medici family).  Venice has remained in their hands ever since, but the power and influence of the Venetian Black Nobility extends far beyond its borders, and today it is felt in every corner of the globe.

In 1204 the oligarchic family parceled out feudal enclaves to their members, and from this epoch dates the great building-up of power and pressure until the government became a closed corporation (don’t we know this from somewhere?) of the leading Black Nobility families.

The Black Nobility earned its title through dirty tricks, so when the population revolted against the monopolies in government, as anywhere else (aren’t we), the leaders of the uprising were quickly seized and brutally hanged. The Black Nobility uses secret assassinations, murder, blackmail, the bankrupting of opposing citizens or companies, kidnapping, rape and so on… hence their name.

Who are these families today?

The Guelphs are so intertwined with the German aristocracy through the House of Hanover that it would take several pages to mention all their connections. All (almost) European royal houses originate from the House of Hanover and thus from the House of Guelph — the Black Nobility. The House of Windsor also controls the price of copper, zinc, lead and tin. It is no accident that the principle commodity exchanges are located in London, England. Companies run by Black Nobility families are British Petroleum, Oppenheimer, Lonrho, Philbro and many many more.

Another Black Nobility family are the Grosvenors in England. For centuries this family lived, as most of the European families, on ground rent. Today the family owns at least 300 acres of land in the centre of London. The land is never sold, but leased on a 39 year leasehold agreement — the ground rent of the middle ages. Grosvenor Square, in which the American Embassy is located, belongs to the Grosvenor family, as does Eaton Square.

In Eaton Square apartments are rented out at 25,000 to 75,000 pounds a month (and that does not include maintenance costs). This is to give you an idea of the immense wealth the Black Nobility families garner from ground rents, and why families like the Windsors are not at all interested in industrial progress along with the excess population it supports.

This is the main reason why these ’noble’ families are behind most, if not all, of the wrong-headed pro-environmental movements of the world that ultimately and covertly (of course) aim to curb population growth.

Prince Philip and Prince Charles are the most visible symbols of these movements, and both have often spoken with the utmost callousness about the need to rid the world of unwanted people. [More recently, Prince William argued for urgent depopulation efforts in Africa.]

The mass of people on YouTube saying that the Rothschilds have $400 trillion, without even looking deeper into the subject are uninformed!  Even the Rockefellers are small potatoes.  Yet so many truthers will still claim those families are the most powerful in the world.

Having the power to print money is not where the real power lies; controlling the available resources is!

If you wish to break free of this system of slavery, become a secured party creditor by joining a DTSS Complete Freedom Membership Program today.

10 Comments on - The REAL Controllers of Humanity: The Papal Bloodlines