Phil Schneider used to work for the government and was involved in the construction of Deep Underground Military Bases (DUMB bases). In talks given in 1995, he said that there were 129 active deep military bases in America and two more under construction, He confirmed (at that time) that there existed a minimum of two underground bases in each state. Phil also mentioned that there were more than 1,450 DUMB bases worldwide.

In 2001, Stewart Swerdlow reported in his Los Angeles talk that there were 133 active Deep Underground Military Bases in America. Phil also revealed that 62 of those 129 DUMB bases were being used as housing facilities for various alien groups that the government had made treaties and agreements with. The rest were being used by humans (military & civilians) for biological, chemical, and mind control development.

Phil mentioned in his last lecture in Seattle, Washington (Sep 24, 1995) that he was publishing a book that would expose these government secrets and identify the location of every underground base in America, as he felt the American public were entitled to know what theor government was doing with their money and keeping secret from them. When Phil was found murdered in Oregon in early January, 1996, all of his records, alien artifacts, journals, book manuscript, etc. were missing.

4. Grand Wash Cliffs, on the western edge of the cliffs at the head of Grapevine Wash. Must be reached via hwy 93 and then unpaved roads. DUM base. Page 303 …

6. Hualapai Mountains, east side of the mountain range, about 35 mi. SE of Kingman, AZ

14. 29 Palms Marine Base, Identified on a military map as airspace area R-2501 N. Saucer base southeast of Ludlow. This is a U.S. alien research/ diagnostic facility and UFO base.

22. Los Angeles, On Hwy 14 towards Edwards A.F.B. after Palmdale, one turns off and after taking several streets to 170th street, north on 170th St. to the Rosamond-1 70th intersection, the second and lower and better-maintained dirt road will take you west, and if you take a right going north at the power lines and up to the hilltop you will see the top of an underground NORTHOP facility; Technology for the elite’s secret projects. This area was very active in the 1970s. Northrop’s facility is near the Tehachapi Mtns. It has been reported to go down 42 levels. It is heavily involved with electronics and hi-tech aerospace research. 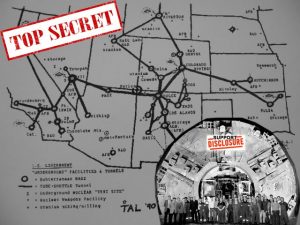 `24. Kern River, CA the hollowed out mountain next to the hydroelectric facility at the Kern River Project near Bakersfield- reported saucer base

25. Napa Valley- located at Oakville Grade north of Napa, CA. Tunnels also connect the wineries north of Napa, used for white slavery and mind-control. Has a saucer base.

26. Norton Air Force Base- saucer base

28. Near Palmdale (if one takes Palmdale Blvd. til 240th St. and goes to Ave R-8. One the eastern limit of Ave. R-8 is McDonnell-Douglas’s facility called the Uano Facility. One can see it better from the Three Sisters Hills to the south of the facility. Strangely shaped disks raise out of the ground on pylons. These attached disks glow and change color. It is involved in hi-tech aerospace technology.

38. Boulder, CO–The headquarters for EMC, a type of electromagnetic mind control that is being broadcast to modify the thinking of Americans, and to control slaves.

40. Fort Collins- base for Gray aliens

44. Massive base- reported saucer base

46. Atlanta, GA –FEMA regional center, which is appropriately placed since Atlanta is to become a capital within the NWO redrawing of boundaries. Atlanta is believed to have several underground installations in its area, one to the north at Kennesaw Mtn., Marietta, GA connected to Dobbins AFB and one to the south of Atlanta at Forest Park.

48. Lower Goose Lake area in the general area of Oakley, ID.–Wackenhut of the Illuminati run a “model prison” for the NWO. The worst of the federal prisoners are placed in this underground prison which has 7,100 cells which are filled with about 2,700 federal inmates. A track runs through the middle of the eerie underground facility. Food and showers are on the tracks, and the men are allowed showers once a week. The minimum of lighting is used and the men are beaten senseless if they talk at all. It sits 500’underground.

53. Camp David–just north of the camp is an underground facility important to the intelligence agencies.

54. below Ft. Meade, of the National Security Agency, 10 acres of the most sophisticated supercomputers that can be built, very large complex, massive surveillance of all the world’s communications, including all transmissions in the U.S. & world of telephones, telegraph, telex, fax, radio, TV and microwave transmissions.

55. Olney, actually the facility is between Olney and Laytonsville, on Riggs Rd. off of Rt. 108. Another underground facility may also exist in the area, FEMA & possibly NSA, the facility may be 10 levels deep, purpose unknown.

61. In the Bat/Dry/Dead Man/ Howell cluster of caves- reported saucer base

66-68. Groom Lake, also known as Dreamland, Area 51, The Area, the Spot, Red Square, Sally Corridor, Watertown Strip. 1150 50’N 37°20W. Run by the NWO along with demonic beings, the CIA is there and Wackenhut Security. Two large underground facilities close to but separate from Groom Lake but controlled by the demonic beings are Papoose Range and Cockeyed Ridge (S-4) underground bases. The purpose is the testing of various UFOs and other secret aircraft like the Aurora and Stealth. Also, biological work is done, including the biological raising of small greys. Many levels have been built t these three complexes, and a 7-mile long runway (which is actually 39 miles) Page 305 … has been built over Groom Lake, a dry lake. There is an S-2, an S-4, an S-6, and S-66 underground installations. S-66 is the most secret and it has 29 levels and is 11, 300′ deep.

71-73. There may be as many as three underground installations in New Hampshire’s hills (according to reports).

The New Mexico area has basically four underground system out.

The Los Alamos facility dates at least back to 1940. One can only imagine what has been built with 1/2 century of labor on this underground system. Visitors to the deeper levels report humans kept in glass cylinders, plus many other strange things. I have had the opportunity to debrief some people who have been in the lower reaches of some of these facilities. There are special badges, special uniforms, tube elevators etc. which for lack of time I will not describe.

76-78. Dulce, N.M., 36º 56.0’N 106°59.8’W,–South of Dulce, in the area of the Jicarilla Indian Reservation, another facility is east of the Dulce facility a number of miles. This is run directly by Illuminati w/ Army and Airforce help, CIA also conducts experiments at the center; the size of the installation is hugh requiring small shuttle trains and has seven levels according to witnesses. Serves as a UFO base, biological experiments, production center for small-grey drones. Wackenhut provides some of the security on the ground.

80. Manzano Mtn, near Albuquerque, known as the Kirtland Munitions Storage Complex, Airforce, 3,000-acre base within the Kirtland AFB/Sandia National Labs complex, guarded by 4 lethal rings of fences, use unknown, suspected UFO base. A new 285,000-sq. ft. bunker is being built near Manzano Base.

83. to the north of Taos Pueblo

90. Bull Run, north side of Bull Run Reservoir area near Mt. Hood, and very close to Larch Mtn. and south of Benson St. Park of the Columbia Gorge.

91. Coos Bay area has had three separate but coordinating underground facilities built for UFOs. The facility farthest east, about 20 miles inland in the wilderness near Hwy 42, has been shut down. It is now an old abandoned facility well camouflaged. The coast facility is probably still operational.

92. Klamath Falls, OR–since Sept. ’95 this has been a base for a number of NWO groups including the Air National Guard, FEMA, CIA, FBI, Spetznaz, and Page 306 …
MOSAP training base. An underground concentration camp exists here.

93. Blue Ridge Summit, near Ft. Ritchie, known as ‘Raven Rock” or “Site R”, Army, major electronic nerve center, 650 ft. below the surface with about 350 staff and over a 716 acre area. possibly connected via tunnel to Camp David. The NOD installation is involved with psychic (demonic) and satellite control over slaves. This underground complex is to allow the government of the United States to escape a nuclear attack. The enormous complex radiates under Wash. D.C. and connects with many other sites. The tunnel system is used to move some of the mind-control sex slaves. The walls and ceilings of the tunnels are ceramic tile with fluorescent lighting recessed into the ceilings.

100. Warrington Training Ctr. –two sites: one on Rt. 802 and the other on Bear Wallow Road, on Viewtree Mountain. One is Station A the other Station B. Army & ??, purpose unknown

102. WHITE HOUSE, 38°53.5’N 77°02.0’W–The secret NOD underground installation which is connected to the intelligence groups like NSA and the CIA as well as many other nefarious groups lays under the White House with tunnels connecting this NOD installation with the House of the Temple. The Supreme Council of the 33° of the Scottish Rite’s House of the Temple has a 14′ x 25′ room in it with 13 chairs where the Illuminati’s Grand Druid Council meet. The NOD Deep Underground Installation has numerous levels to it. One eyewitness, went to level 17 (via an elevator) and stated that he believes that deeper levels exist.

104. White Sulphur Springs, under the Greenbriar Hotel, a mini-city large enough for 800 people equipped with its own crematorium, if there are any other purposes other than listening to U.S. microwave communication it is unknown by this author.

In Utah, the Kennecott Copper Company has been connected to the Illuminati and the KKK. These connections have been exposed in other writings by this author. Kennecott’s mine (reported to be owned by the World Bank) in the Salt Lake City area is serviced by Union Pacific, which is reported connected to the Mormon Church. The mine is receiving a heavy volume of big trucks after 11 p.m., for instance, in a normal night over 6 dozen large trucks with 2 trailers each rolling into the mine. In other words, it appears that the heavy train & tractor trailer activity indicates something besides mining.