NASA …. You Have Some Explaining to Do!

National Association of Space Actors, better known as The National Aeronautics and Space Administration(NASA) was founded in 1958 during the Eisenhower administration.  After the U.S. government hatched a plan to bring 88 Nazi scientists captured during the fall of the Nazi Germany back to America in Project Paperclip.

We’re going further down the rabbit hole today folks. So buckle up for safety and hold on to your pacemakers because this is going to get weird and possibly challenge your belief systems.  I should note before I keep going that I respect everyone’s religious beliefs as long as they are not harming others and mean no ill will to those strong in their faith.  I am a seeker of truth no matter how the cards may fall and no matter how uncomfortable it makes me.

If You Are Not Ready To Have Your Belief Systems Challenged…..STOP RIGHT HERE!

I wasn’t alive when everyone was watching Apollo 11 moon landing in 1969.  Nor would I have ever questioned the legitimacy of it if I were. Even in school growing up I never thought twice about the authenticity of not only the moon landing but Nasa in its entirety.

In light of all these truths coming to the surface as the consciousness of humanity rises, there have been some shocking ones about NASA.  Sorry flat-earthers, I am going to burst your bubble.  You’re being led astray and distracted.   Am I claiming the earth is a spinning ball? Nope. Not that either.  Stay with me.

Let’s examine the Apollo 11 moon landing first.  What would be the reasons they would have faked it if that’s the case?  To give the illusion that they were trying to explore to advance humanity?  All the while knowing what’s out there, which they do not want the herd of sheep to know?

There’s been evidence released claiming the Russians went to the moon and walked on it before Apollo 11  “attempted” it.  I’ve also read numerous accounts on truth websites claiming the Germans also went to the moon during the Nazi era.  I believe that Project Paperclip was to sneak in Nazi scientists once the allied forces discovered what they were working on at the end of WWII.

I’ve also read a few articles claiming Stanley Kubrick left clues about the moon landing filming in the movie The Shining.  The fact that Danny wears a sweater with “Apollo 12” on the front means that Kubrick has the moon landing on his mind, according to Kubrick scholar Jay Weidner. Weidner, who believes Kubrick staged the Apollo lunar landing, sees another NASA connection in room number 237: The distance from the earth to the moon: 237,000 miles 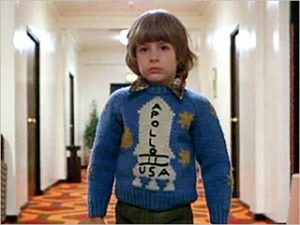 Scene from Kubrick’s “The Shining”

What I think happened is they really did go to the moon but were not alone when they got there and were driven away.  Then in order to deliver “proof” to the masses as they already hyped it up, they filmed the moon landing in a studio when they got back.

It doesn’t stop with Apollo 11 either.  How many of you remember watching the Challenger launch on TV on January 28, 1986?  It was all hyped up because for the first time ever a teacher was going to space.  I remember it like yesterday. Seeing the explosion.  The shock of it all.

Media coverage of the explosion was extensive: one study reported that 85% of Americans surveyed had heard the news within an hour of the accident.

These are the names of Challenger’s 7 crew members:

Oddly enough there is a law professor at Yale named Judith Resnik who looks really similar to the Nasa astronaut who died in the Challenger explosion.  I mean what are the odds of that?  Same name and look alike?  It’s also interesting to note that the name Reznik, an Ashkenazi Jewish surname means ‘ritual slaughterer.’  NASA actually derived from the archaic verb נָשָׁא (/nasha/) which means to deceive.  Nasa-Nazi-Ashkenazi?

If he were still alive, the Challenger pilot should be 69 years old today. Well, there just happens to be a 69-year-old “Michael J. Smith living in Madison, Wisconsin” 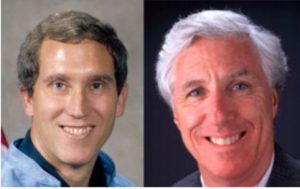 After a little digging I found this……looks like all but one have “doppelgangers” still alive.

What about the Columbia explosion?  If they could pull off the Challenger charade what would stop them from doing it again?

“C. Fred Kleinknecht, head of NASA at the time of the Apollo Space Program, is now the Sovereign Grand Commander of the Council of the 33rd Degree of the Ancient and Accepted Scottish Rite of Freemasonry of the Southern Jurisdiction. It was his reward for pulling it off!

All of the first astronauts were Freemasons. There is a photograph in the House of the Temple in Washington DC of Neil Armstrong supposedly on the moon’s surface in his spacesuit holding his Masonic Apron in front of his groin.” -William Cooper

No matter how you look at it it’s clear NASA is a front.  To make us sheeple believe they are trying to explore space when in reality they want to hinder our advancement as a galactic species.  Another organization filled with members of secret societies.  Taking your tax dollars to put on productions while building a real space fleet hidden from the public.

I keep seeing people fall for the flat earth psyop.  It’s mainly within religious folks.  Due to the bible talking about the “firmament.”  Therefore they claim the earth is flat and there is no “space.”  This is being pushed by the CIA to see how far they can go with disinformation and who will believe it.  It’s also a major distraction.

Those in the “truth movement” arguing among themselves if the earth is flat or a globe hinders progress in liberating ourselves from the parasitic consciousness that has enslaved us all. As much as I can respect other’s religious beliefs it is just downright silly to think that there is no other life out there.  That space doesn’t exist.  That all other life forms besides humans on earth are “demons.”  It’s time to grow up and evolve.

If you research  Nikola Tesla’s work you can figure out the earth is not flat nor is it a spinning globe.  Do you think tech billionaires are crazy for asking scientists to break us out of the simulation we might be trapped in?

If you’re still reading this you have chosen the red pill.  Welcome to the matrix!

1 Comment on - NASA …. You Have Some Explaining to Do!