We are Being Microwaved: Why aren’t Consumers Made Aware of Electromagnetic Pollution?

Pollution! It’s a trendy but gloomy word designating something most people try to avoid contributing to, but not many folks realize what causes it and how it affects them.

Humans and technology are the primary contributors to ALL pollution, either inadvertently or deliberately.

Manufacturing processes; obtaining raw materials and resources (mining and forest destruction, etc.); and technological ‘advances’ – more often than not – are the major contributors along with vehicular exhausts and ever-increasing road traffic. 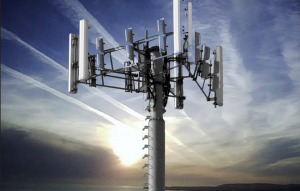 Man-made pollution and it’s devastating ecological and adverse health effects have been referred to as “anthropogenic activity,” meaning changes made in Nature made by people.  Here are some of the more commonly known pollution problems:

However, the above pollution listing is not complete! Missing are:

Only one — SRM — of the above four pollution sources is visible to humans if only we will look up from our cell or iPhones to see what’s happening in the skies above our heads. 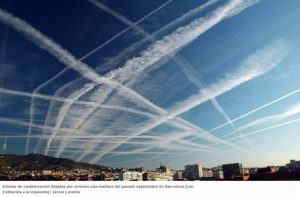 The other three are invisible to the naked human eye, but not to human physiology and other living organisms, including plant life!

Let me ask, Can you see the wind? No! What you actually see are the effects of wind blowing, in most cases, i.e., trash, leaves, etc. being displaced and scattered, but you really cannot see the wind per se.

You can feel it, though! You can see a tornado cloud formed by the wind, but wind per se is not visible to the naked eye.

That is the analogy I like to use to explain Electromagnetic frequencies, Radiofrequencies, and Non-thermal radiation, which the microwave industry and its premiere professional association ICNIRP pontificate does NOT exist! However, ICNIPR acknowledges Thermal effects!

Even though the human eye cannot see electromagnetic frequencies in most cases, they certainly exist; can be ‘seen’ using certain monitoring equipment specifically built to measure them [1-2]—so they are proven to be there!

However and though unseen, their presence in the atmosphere is real, all-pervading and contribute to the sea of electromagnetic frequencies we constantly are being bombarded with – or, as some would say, mildly ‘electrocuted’ by!

The current obsession with cell phones, iPhones, Smartphones and other microwave-propelled technologies, e.g., Wi-Fi, AMI Smart Meters, Routers, LAN networks, etc., create pollution few are aware of but all are affected by adversely.

Please refer to my article Cell Phone And Microwave Information Consumers REALLY Ought To Know to understand what’s involved with cell phone activity and how it affects your body.

Each time anyone uses a cell phone, or any tech product which uses microwaves to operate, electromagnetic frequency pollution (RF) is created that contributes to electromagnetic hypersensitivity (EHS) [3] health issues, which become cumulative in the body until you cannot think and function properly.

According to statistics, 3.2% of Californians; 9% of Germans; and 5% of the Swiss population complained of EHS! [4]

That is the unknown side effect of unseen microwave activity pollution and EMFs/RFs, which often strikes out of the blue — or so it seems after prolonged cell phone and other electromagnetic frequency exposures for years — and then life becomes the nightmare you never thought it could be.

Just ask anyone who has EHS! Are you aware EHS is recognized as a disability under the Americans with Disabilities Act?